Air Coolers and Portable Air Conditioners; to the uninformed eye, these appliances may appear one and the same. However, there are some distinct differences between them- most notably, how they cool air. In this article, I’ll go into the Air Cooler Vs Portable Air Conditioner debate and explain how each device works while discussing the benefits and drawbacks of each. 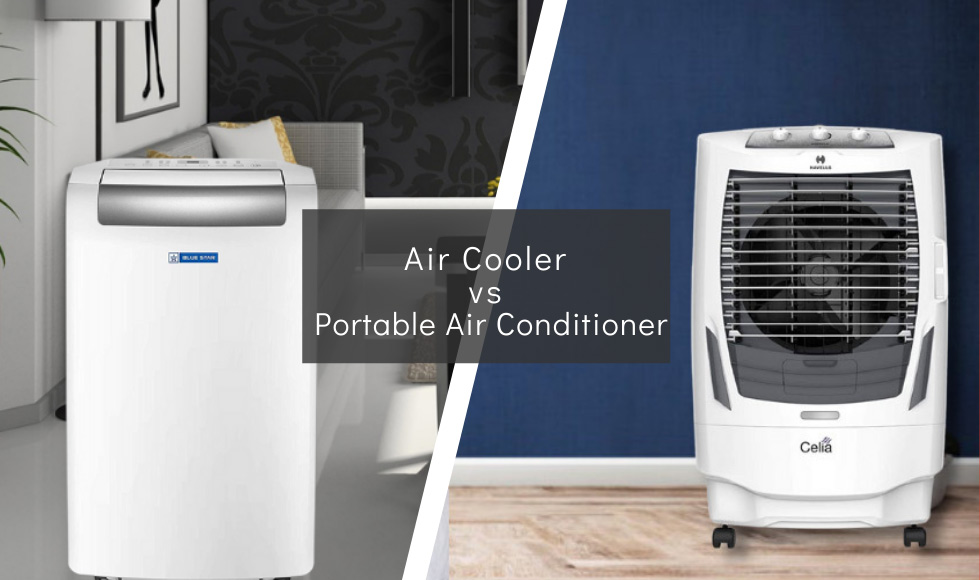 Let’s start with Air Coolers first. These devices provide cooling through evaporation. They primarily use a fan and water-soaked process to get rid of heat. The fan draws in hot air and forces it over the water-soaked pad. This reduces the air temperature, similarly to how our bodies cool down when coming in contact with water. Afterwards, the cooled air is blown out into the room.

When should you buy an air cooler?

You should use an air cooler if the heat in your area isn’t particularly high. You’ll get decent cooling without wasting much energy. This kind of appliance is also a much better choice if portability is an important factor- after all, you can even use it outside if you want to.

Recommended Reading: How to increase the cooling of Air Cooler? 7 Tricks that will cost you nothing

Portable ACs are fairly recent technology, and they have a cooling system that’s significantly different from an Air Cooler. They use the same mechanism that full-sized Window AC or Split ACs do; they take in the hot air from the room, cool and dehumidify it using a refrigerant, and release the cooled air back into the room.

When should you buy a portable air conditioner?

If you live in an area with high humidity levels, need a large room to be cooled or simply need more cooling than an air cooler can offer, you can go for Portable ACs.

Do note, though, while these ACs can offer much more area coverage than air coolers can, they still can’t handle very large rooms particularly well. If you need to cover a large area, it’s better to go for full-sized best AC instead.

Here’s a brief table comparing the main differences of the two devices.

This section of the post will give you detailed answers to some of the most common questions asked about these appliances.

Can these cooling devices dehumidify the air?

Air Coolers can’t dehumidify the air, but Portable ACs can do a far better job. That’s what makes them so good for humid places. If you live in a coastal area, you’ll be better off getting the latter.

Why are Portable ACs not good for outdoor use?

Portable ACs aren’t as easy to move around as air coolers are. Plus, they’re effective in closed spaces, with all outside air sources closed off. They also need a window or exhaust pointing outside to vent hot air.

Is an Air Cooler the only good option for night use?

I can see why you’d think that, considering the noise levels. Primarily, yes. Portable ACs can produce noise as loud as 50dB. Although, good models make much less noise, around 40dB. Some of the highest-end models can even go down to 20dB, as they come with a specialised night mode feature.

Yes. Some Portable ACs come with a fan mode that offers the same kind of air a standard fan does, without any added cooling.

Yes, they do. In fact, we have a guide on cleaning Air Coolers. Check it out here.

Recommended Reading: Top AC brands in India(2022) and what you should expect from them

So, between Air Coolers Vs Portable Air Conditioners, which one wins? There’s no obvious answer. They’re both good for different purposes. Air Coolers are good for light cooling and use less power, while Portable ACs can provide much more powerful cooling.

It really all comes down to your needs. If you need something for a small space that can be moved around easily, go for an Air Cooler. If you need stronger cooling power in general, go for Portable ACs. I hope this post helped you learn more about these appliances.

That’s all. Stay healthy and stay cool; I’ll see you in the next post.

8 Compelling Reasons You Should Replace Your Old AC

What Are Smart ACs? All The Benefits And Features You Need To Know

What is a Portable AC? Does It Worth The Purchase?