There’s more to the quality of Bluetooth Earbuds than their general specifications. Certain technologies need to be considered. For the best possible audio, you’re going to have to delve even deeper and pick earbuds that have the right Bluetooth audio codecs. What are they, you ask? Well, in this post, I’ll tell you all about what Bluetooth Audio Codecs are. Whether you’re a casual user or an audiophile, you’ll find everything you need to know here. Let’s get started.

What Are Bluetooth Audio Codecs? 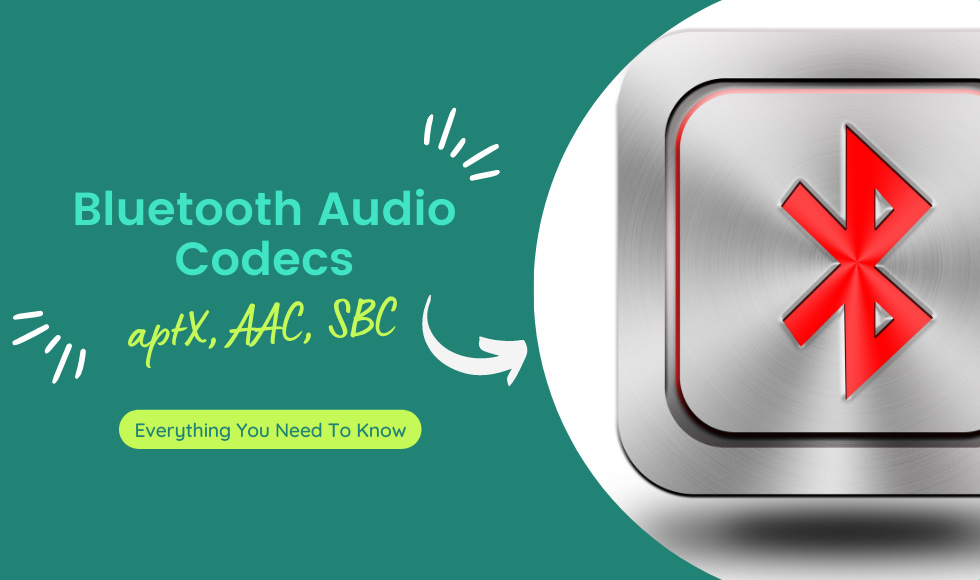 When your phone or laptop transmits audio to your earbuds over Bluetooth, it generally needs to do some compression for the process to work. There are some compression techniques that are used to prevent the reduction of sound quality. These techniques are called Audio Codecs.

How Do Bluetooth Audio Codecs Work?

Essentially, a codec decodes and encodes sound into certain formats so that a very little amount of space and bandwidth is needed during the transmission process. There are multiple types of Bluetooth Codecs available, the most common type being SBC. I’ll get to talking about them in a moment- first, let’s get a few basics out of the way.

Before we get started, you should take a moment to learn about these terms. They can help you understand how the codecs differ from each other and offer you a better insight into the technicalities of audio devices.

SBC, standing for low complexity sub-band codec, is the codec that most Bluetooth Audio devices use. It’s what allows a pair of earbuds to work with any phone if the phone doesn’t support any other type of Bluetooth Codec. The sound output quality is decent, though other Codecs still offer much better audio. SBC works with different bitrates, from 192Kbps to 320Kbps.

Many low-cost Bluetooth earbuds on the market today include AptX, a Qualcomm-developed codec. It produces audio quality that’s superior to an SBC codec. It’s one of the best types of codecs available since it lets you get excellent sound quality without breaking the bank for high-end Bluetooth headphones. Audio Codecs that are better than AptX can only be found in higher-end audio devices. This codec supports transfer rates upto 352Kbps.

Additionally, it can also play audio up to 48KHz at 16-bit quality. There is a downside to this codec, though. It has no support for iPads and iPhones, as it was primarily designed for Android. If you’ve got the latter, then you’re in luck. You can easily find earbuds with AptX support within Rs 2000.

Now we’re getting to the highest end codecs. LDAC is an incredibly powerful compression technique. It was designed by Sony, and it’s the only codec that has the capacity to deliver 16-bit 44.1Khz audio with no loss in quality. It even supports audio at 24-bit 96Khz quality. No other audio codec has such support. Even better, it supports the highest transfer rate of all, capping at 990Kbps. Although, it might run on 660Kbps or 330Kbps based on signal quality.

You can find support for this codec in most Sony earbuds, though it isn’t exclusive to them. There are also options from other brands like Shure, which support this audio codec. I’d highly recommend looking for this audio codec if you’re an audiophile. Do note that there are some limitations, though. Like AptX, it doesn’t work with Apple devices either. And if you’re planning to use it with Windows, you’ll need to use an external DAC to make it work.

You may not realise it, but you’ve probably come upon this term several times while looking for a good pair of earbuds or Bluetooth speakers. This audio codec is even more common than SBC. It stands for Advanced Audio Coding, and it’s widely supported across many types of devices, including iPhones and iPads.

It produces better audio than the standard SBC codecs when it comes to quality. To be more specific, most devices can transmit audio at 250Kbps while using AAC, and they can also stream 16-bit audio at 24KHz. This codec is a great option for an average user, though an audiophile might not find it satisfactory. That’s because it doesn’t support CD quality or HD audio. It’s also more CPU intensive than other codecs around its level, so it causes a larger battery drain and occasionally has latency/delay issues.

AptX HD is the updated and improved version of AptX. Unlike its predecessor, which supported bandwidth upto 352Kbps, this one supports bandwidth as high as 576Kbps. There are other improvements as well- it can support 48Khz audio at 24 bit, whilst the original version of AptX only supported 16-bit audio.

Another large benefit of AptX HD is that it can also play audio at CD-like 6-bit 44.1Khz quality. When it comes to quality compared to other codecs, it’s almost as good as LDAC. The latter is still superior because it still produces slightly higher quality audio and supports a 96Hz sampling rate. AptX HD isn’t supported by Apple devices but is present in most Android ones.

Among all the other audio codecs, AptX LL (AptX Low Latency) is the best for watching content. It’s essentially a version of the standard AptX codec designed to offer minimal latency. For people who intend to watch a lot of movies with their wireless devices, that can be a game-changer. Why, you ask? After all, certain codecs offer much better audio quality, right? Well, that’s true, but latency is an entirely different matter.

The other codecs can have a latency as high as 300ms, which is completely inappropriate for watching content. With wireless headphones, you need to have your latency within 40ms for a hassle-free movie watching experience. If there’s more delay than that, then you’ll experience lip-sync and other audio issues in whatever you’re watching. AptX LL can reduce the Bluetooth transmission latency all the way down to 32ms, completely getting rid of such issues. To make use of this codec, you need to ensure it’s supported in both your earbuds and the device you’ll watch things in. You might also need to install an AptX LL Bluetooth transmitter.

This sort of codec is only recommended for movie watchers, though. If you simply listen to music, then all the other codecs will still provide much better audio and visual inconsistencies won’t be a problem as you wouldn’t need to look at a screen.

If you’re torn between choosing AptX LL and AptX HD, then you can try to find earbuds that support this audio codec. That’ll take some effort since it’s a very recent codec. However, you’ll get many benefits if you manage to procure supported earbuds. It supports data transfer rates from 280Kbps to 420Kbps. Though that isn’t as high as AptX HD, which supports upto 576Kbps, Qualcomm says that AptX Adaptive can still match the sound quality of its HD counterpart.

This codec can also switch to a Low Latency Mode, providing the benefits of AptX LL. You won’t get latency as low as 32ms, but this codec can still provide a relatively lower latency of 50ms. However, you won’t notice any difference, and even this kind of latency reduction is far better than what you can get from other codecs. The worst thing about this codec is its support issues- it doesn’t support Apple devices. Not many Android devices support it either, but unlike the issue with Apple support, this might improve as such a situation is simply because this version of AptX is fairly new.

Should I focus more on other specifications or more on the Bluetooth Codec when buying wireless earbuds?

There’s no clear cut answer to this question. To pick the right earbuds in this scenario, you’ll have to compare them physically and see which one sounds better. If you can’t do that, then the next best thing would be to look closely at all the ratings and reviews about the products.

Which codec is best for gaming?

Well, it depends. If you plan to play single player games or have an iPhone, AAC is your best bet. However, if you want to go competitive in an online game, then you can go for AptX or AptX LL instead. Just remember that support for these codecs is hard to find, and they’re only compatible with Android smartphones.

Are there any other codecs that work with iPhones?

Luckily, yes. The SBC codec works with iOS devices too, but you shouldn’t expect it to have the same audio quality as AAC or other Apple-compatible codecs. You might not even be able to tell the difference between this and standard headphones/earbuds that don’t support any of these codecs.

Recommended Reading: What Are IP Ratings And What Do They Mean For Your Earbuds?

There you go, you now know what Bluetooth Audio Codecs are. If you consider everything I said, you can easily identify a good pair of earbuds or Bluetooth speakers. Do keep in mind; hatever codec you prefer, you need to make sure that your phone also supports it to actually play it. Higher transfer rates are excellent, but they won’t be of any use if your devices don’t have proper support.

That’s all for now. If you’re a fan of audio equipment, feel free to check out this buying guide we have for home theatres. Good luck, and see you in the next article.

IEMs Vs. Earbuds: Which Sound Better?

How To Make Your Earphones Last Longer: The Do’s and Don’ts

Different Types Of Earphone Drivers And How They Work: A Comprehensive Guide

What Are IP Ratings And What Do They Mean For Your Earbuds?

Neckbands vs True Wireless Earbuds: Which one should you choose?

Active vs Passive Noise-Cancelling Headphones: Which one is better?

How to use earphones without damaging your ears?

Headphone Buying Guide- How to Find the Perfect Headphones?