If you look at some of the thinner laptops, you’ll see that most of them use Solid State Drives (SSD) as boot drives. Likewise, more powerful laptops use SSDs as well. Also, Prebuilt PCs use SSDs as primary drives. Though, you’ll still find HDD only storage in the cheaper variants of laptop and desktop computers. 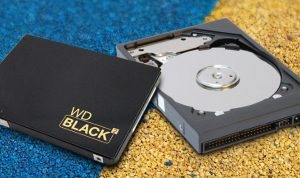 Choosing isn’t an issue when some computers use both an HDD for storage and an SSD as the primary drive. But when you have to choose one only? When it comes to HDD Vs SSD, there are so many things to consider as both offer significant benefits to the user.

Of course, we’d advise you to choose an option that offers you both. However, if you need to choose one to save some money, then we’ve got you covered. We’ll also talk about all the other options available to you, including some which people usually don’t talk about.

HDD Vs SSD – Everything you need to know

We’ll talk about how each of these works first, and discuss the advantages and disadvantages of both. Each one of these has their own unique traits that might be more practical for you.

The HDD is a form of storage that most of the computers around the world used before SSDs were a thing. It’s the non-volatile storage of the computer, where the data doesn’t disappear once you shut the system down, unlike RAM.

You can think of the HDD as a metal platter, which has a magnetic coating on top of it that’s capable of retaining data. There’s a head on the HDD’s arm meant to read the platter and write data on it while it’s spinning. The most prominent characteristic of the HDD is its large form, which is a contrast to the compact one of the SSD.

SSD’s work similarly to HDDs, but on a less physical level. Rather than using metal platters and mechanical hands, these store data on interconnected flash memory chips.

These chips can store data even when they’re not getting powered. Although, these flash chips aren’t the same as the ones used in USB drives. They’re also faster and more reliable. That’s why they’re more expensive than USB flash drives.

SSDs are also smaller than HDDs and as such computer manufacturers have more chances to add in other useful components. To clarify, when making a laptop they can put in a PCI Express slot instead of a larger hard drive bay. The best SSDs are M.2 ones, found in high-end laptops like laptops under Rs. 60000 and above.

Here’s a comparison table to summarise some of the most important details.

Sometimes having one of the two might not be enough for you, especially when there are times you might need the benefits of the type of storage you don’t have. There are some other options you can try in such cases, including both expensive and inexpensive ones.

It works similarly to an SSD, with some concepts from RAM. It doesn’t come with that much storage, either being 16 GB or 32 GB only. They speed up your system significantly by storing vital system files and boot files that affect the overall system performance.

Intel Optany Memory can speed up any hard drive to SSD level speeds, though it doesn’t offer the additional storage of an SSD. However, that shouldn’t be much of a problem as you can easily buy a large but inexpensive hard drive.

Optane Memory needs specialised hardware support, so you might not be able to use it in every desktop. Laptops which support Optane Memory already have one, so you don’t need to worry about buying one separately. A laptop with Optane Memory is essentially a cheaper alternative to one with Hybrid Storage.

Speaking of Hybrid Storage, it is even better than the Optane Memory, as you get the extra benefits of the relatively larger space offered by an SSD.

Hybrid Storage is a rather fancy term, but there’s nothing that’s incredibly unique about it. It’s just a combination of a large HDD with something like a 128 GB or 256 GB SSD. You’ll find this form of memory in laptops for the most part.

If you’ve got budget to spare, we suggest you go for this sort of storage, otherwise sticking to Optane Memory would be a good idea.

1. Which kind of storage is suitable for video editing?

For video editing, we advise choosing at least a hard disk with 1 TB of storage and a 256 GB SSD. That way, you can store large project files in the hard disk and keep your program running smoothly with the SSD.

In addition, you also get the benefit of being able to store the more important project files directly in the SSD itself to keep the loading speeds at a maximum.

2. How do I defrag my hard disk and how often?

If you notice that your laptop gets slower, then it would be a good time to defrag your hard disk. Though, doing it as often as possible would be the most ideal. The defragmenting process is easy; you just need to search for the defragment tool in the search bar, select the drives you need defragmented and start the process.

If you need visual instructions on how to do this, you can go to our more thorough article on how to speed up laptops.

3. Is there any way to optimise an SSD?

Hard Drives need constant optimisation because the head of the HDD arm needs to move around erratically to collect data scattered by fragmentation. The problem is entirely the fault of the HDD’s mechanical design.

However, as SSDs don’t function in such a way, fragmentation isn’t an issue with any. All the data stays in one place, so the system has no problems reading it. In fact, the process of defragmentation can be extremely harmful to an SSD. That’s because every SSD has a limited number of times it can be written to.

The defragmentation process will move the data around and cut down on the number of write times the SSD has left. As a result, you’ll find the storage drive to wear out eventually, especially if you defrag often.

The SSD can still be optimised, though. You can increase its efficiency a little by using the “TRIM” command, which is specialised for SSDs. You can do it manually, but you don’t need to. Just run the defrag tool, Windows will automatically recognise what sort of storage you’re using and run either the TRIM process or the defrag one.

It still does put in a little bit of fragmentation management on the SSD, though nothing as extreme as the one HDDs get.

As you can see, when you put HDD Vs SSD, both are winners in different aspects, and for some people, there are entirely different options altogether. This article should help you decide on the perfect storage for you, as we’ve talked about everything from the budget to what mechanics each storage type uses.

Running Low On Disk Space? Try One Of These Excellent Cloud Storage Services

How To Improve Laptop Audio Quality- Step By Step Guide