Have you ever wondered what inverter technology is in a refrigerator? Then this article is for you. Here we will discuss this technology in detail. 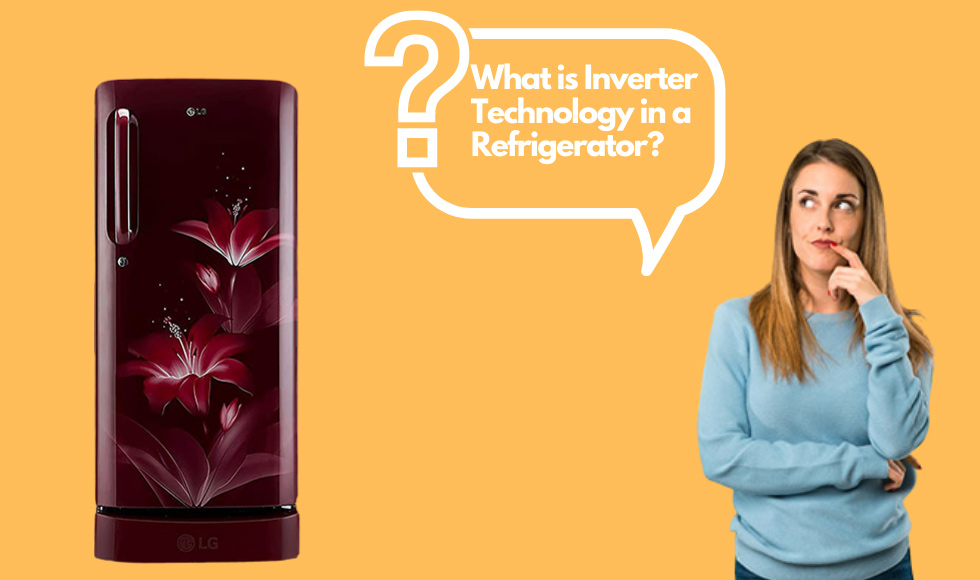 Suppose you are looking to buy a refrigerator that works well and consumes less power. In that case, there is one crucial component you need to consider. That component is the compressor. For you to find the Best Refrigerator in India, and save a lot of power, it is a must. With the Inverter Compressor technology, you can save upto 30%-50% power consumption.

Although a refrigerator with Inverter Compressor technology can be more expensive up front, it will save you a lot of money in the long run.

In this article, we’ll discuss this Inverter Technology in a refrigerator in detail. Furthermore, we’ll explain how this technology can save you money.

How does the refrigeration process work with the compressor?

A refrigerator uses a coolant, usually HFC-13a, which flows through the coils or pipe behind it. This coolant absorbs the heat from inside the fridge. Afterwards, it evaporates it into gas and cools the items inside.

The compressor raises the pressure after that to compress the gas. This compression turns it back into a hot liquid. Once done, this liquid then passes through a condenser unit to cool down. It then propagates inside the fridge and goes back into the compressor once it turns into a gas. This process repeats itself and keeps the food cold and fresh inside the refrigerator.

Thus, the compressor has an active hand in the cooling process and needs to consume a lot of power to function.

Now that we’ve talked about how the compressor works to cool the food, let’s talk about how it works. The compressor turns on when the temperature of the refrigerator reaches a set limit. It keeps working until the heat goes down and the fridge cools to certain levels.

Once the set temperature is acquired, the compressor turns off on its own. This continues with the compressor switching on and off after meeting certain conditions.

Inverter technology in the refrigerator has come a long way. This technology improves on the flaws of its predecessor and has more efficiency.

The concept of this Inverter Compressor is like that of a car accelerator. If the compressor needs more energy, then it will consume more power. But, when it doesn’t need that much energy, it will keep the energy consumption to a low level.

The Inverter Compressor never turns off. Instead, it adjusts its power based on inside and outside temperatures. Additionally, it also uses the thermostat settings. It adjusts the speed and power in accordance to these.

This technology was first developed in Japan by Toshiba before going widespread. It is now present in various appliances all over the world.

How does the Inverter Compressor work?

Varying frequencies of the incoming voltage input regulate the speed of the Inverter Compressor. In the beginning, the circuit of the inverter regulator converts the AC electric supply to DC. Afterwards, the DC gets turned back into AC with the ability to vary its frequencies.

By this, the inverter supplies variable frequencies of voltages to the compressor. That allows the compressor to operate at different speeds. The compressor can speed up to the highest power only whenever the cooling load is high. As a result, this saves up to 50% more energy than a regular compressor.

How can it help in saving electricity?

An Inverter Compressor is exceptionally efficient. It regulates itself with the cooling load, but it also knows how to adjust in various situations.

For instance, when you open the refrigerator to put in items or take them out. In this situation, you might leave the door open for an extended period. The compressor will sense the change in temperature and start working at a higher speed. That is to to make up for the loss of cold air without wasting electricity on overcooling.

Even during nights, when there is little to no activity, the compressor runs slowly. As such, this kind of compressor can save as much as 30% of your electric bill, if not more.

The benefits of using an Inverter Refrigerator

Beside general power savings, you get other benefits as well that increase convenience.

Cooling is precise due to the smart mechanisms of the Inverter technology in the refrigerator. The speed of the compressor changes according to the food load, outside temperature. It also recognises thermostat settings and whether if the door is open or closed.

Typical refrigerators make loud noises, as the compressor often runs at high speed. An Inverter compressor, on the other hand, starts at low speeds. It always transitions between speeds smoothly, reducing noises.

As the compressor doesn’t start at full speed or shut down abruptly, the wear and tear are much less. Every transition is smooth and doesn’t demand high power. So, the compressor will last longer.

Here, we will include a table to summarise everything we’ve talked about so far. Also, this will make it clearer about how efficient Inverter Compressors are.

Popular Brands in India that use inverter technology in refrigerator

Premium LG refrigerators use a different Inverter compressor. This Compressor, called the Inverter Linear Compressor, uses a linear arrangement of an electromagnet. This arrangement attracts the plate to where the piston is fixed.

Standard Inverter Compressors involve four friction points. The electromagnetic setup, however, reduces the friction to one point. As a result, it saves energy and keeps food fresh for extended periods.

Standard compressors operate at full speed, generally at 3600 rpm. On the other hand, Digital Inverter Compressors run at ranges from 1100 rpm to 4300 rpm.

Not only that, but Samsung’s Inverter Compressors also have nine sensors. The Compressor uses those sensors to optimise its speed based on readings. These sensors can also track usage patterns and humidity levels. Therefore, you get higher efficiency and consistent temperatures.

Whirlpool, a company from the US, produces refrigerators with Inverter Compressors as well. Additionally, these compressors from Whirlpool are unique and provide more convenience.

The most common Inverter Compressor in Whirlpool fridges is the Intellisense Inverter. This one adds to the efficiency of the original design. It does so by adding three extra sensors for optimum control.

The first sensor gathers information about the internal temperature of the fridge. The second sensor estimates the food load inside the refrigerator. The final sensor senses the usage pattern. The Compressor uses the gathered data to adapt to the user’s needs.

Some of their refrigerators also use a Plasma Inverter, which is an improvement over Intellisense Inverters.

Besides the sensors of the Intellisense Inverters, the Plasma Inverter Compressor adds an extra layer of plasma coating on the compressor rod. This Compressor is more durable than regular ones, promising to last 25 years, instead of 20.

If you’re looking to buy something from a local brand, then Godrej would be the best. They make refrigerators with Indian consumers in mind. As such, they make their unique Nutrifresh Inverters capable of withstanding electrical malfunctions. This leads to savings for both money and electricity. These compressors also last a long time and provide exceptional cooling.

1. Which is better, a Digital Inverter Compressor or a Standard Compressor?

A Standard Compressor isn’t an ideal option, as the disadvantages outweigh the advantages. A digital inverter compressor can adjust the speed as per the cooling requirements. The inverter never really turns off; it only reduces the speed.

2. What is Smart Inverter Compressor?

Smart Inverters are a revolutionary step for compressors. With this, the Compressor can adjust temperature and cooling according to the load within the fridge. This further reduces energy consumption while providing optimal cooling for the food at the same time.

The difference between a digital inverter and a smart inverter is that the first can control the cooling after it reaches a set temperature. In that way, it reduces power consumption.

A Smart inverter works similarly. However, it can do it more efficiently as it adjusts the temperature according to the food within.

Let’s talk about the reciprocating compressors first. These are older and consume much more energy than others. You won’t see them in most modern refrigerators.

The digital inverter is the most often used, as it can regulate the amount of cooling required, which makes them better than traditional machines. On the other hand, regular compressor function at their highest capacity. As a result, it uses up a lot of electricity.

The new Smart Inverter technology can control the temperature automatically. It does so by sensing the amount of load inside the fridge. In that way, it helps in lowering energy consumption.

An inverter refrigerator is more efficient when compared to traditional fridges. That is because it can control the amount of cooling as per requirements.

The rating on a refrigerator tells the consumer how much of electricity a product will consume, typically in a year. An Inverter is generally present in a 5-star fridge, as it contributes to energy saving. The stars indicate how energy efficient the product is. Both work hand in hand together. Therefore, both provide energy efficiency.

A refrigerator using a Samsung Digital Inverter compressor can reduce energy consumption by 46.9%. For it, the temperature control panel is somewhere around the freezer door. The temperature ranges from -15 C to -23 C in the freezer.

You can activate the Power Freezer mode at the touch of a button and get quick ice. The benefit of this Inverter Technology is that the fridge works less to maintain the proper temperature.

7. Is it necessary to have a lot of sensors for the Compressor?

Yes, having many sensors allow the Compressor to work more intelligently. Due to that, it provides optimal cooling while saving the most energy. However, some come with fewer sensors which do the job just as well. These focus on the most significant factors of power usage. As a result, it is still just as energy efficient.

Energy savings, along with efficient cooling, indicate a good refrigerator. You’ll recover the money you pay as the upfront cost, and you will save more money than what you have spent.

You should go for Inverter technology in the refrigerator if the upfront cost isn’t a concern. With the right balance of cooling and power consumption, you can buy yourself the Best Refrigerator in India.

How The Whirlpool 265 L 2 Star Frost-Free Double Door Refrigerator Is The Perfect All-rounder: A Closer Look

Whirlpool 340 L 3-Star Inverter Frost-Free Double Door Refrigerator – Is It Worth The Money?

11 Convenient Ways To Get Rid Of Refrigerator Odour

Most Common Refrigerator Problems And How To Fix Them

Top Mount Vs Bottom Mount Refrigerator: Which One To Pick?

Which are the Best Refrigerator Brands in 2022? Know it from the experts

How to Organize a Refrigerator? Easy Hacks from the Experts

Refrigerator not cooling? Here’s what you need to do

Single Door vs Double Door vs Side-by-Side: Find the Right Refrigerator For Your Home