Yes, we did manage without having the comfort of a kitchen chimney, but not anymore! When you are contemplating bringing home the best kitchen chimney, you must be aware of the types of kitchen chimneys available to choose from. Duct vs Ductless Kitchen Chimney – I am here to tell you about both from scratch. So, even if you are absolutely new to the concept, there’s nothing to worry about. 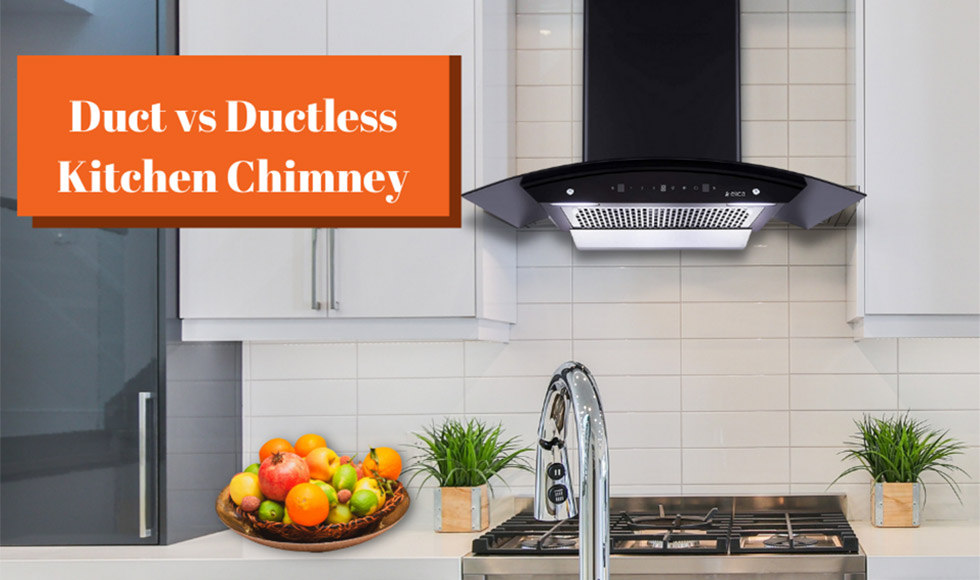 Why is it so important to have a kitchen chimney? So you could avoid the aftermath of Indian cooking as much as possible. Undoubtedly, Indian cooking involves a lot of masalas and oil. This is sure to leave behind pungent smells, fumes and smoke. It doesn’t end there; it also leaves a mark on the kitchen roof and tiles. This is unnecessarily giving birth to a foul-smelly, greasy and unkempt kitchen environment. Would you like to go back and cook in that same kitchen? Such unpleasant feels! Let’s put an end to it right away.

What are the advantages of a Kitchen Chimney?

Before I begin telling you the difference between the duct and ductless chimneys, you must know how beautifully the appliance can benefit you.

Benefits of a Kitchen Chimney

Are you sold on the idea of getting one? Check my blog on The 9 Best Kitchen Chimneys in India 2022 – Reviews & Buyer’s Guide.

Duct vs Ductless Kitchen Chimney: What is the difference?

Kitchen range hoods have advanced drastically over the years. Based on the installation process, you have two types of kitchen chimneys to choose from – Duct and Ductless. Let me now walk you through the working, advantages and disadvantages of both.

Duct Kitchen Chimney: How does it work?

Also known as a ducted kitchen chimney, the appliance uses a large pipe to channelize all the airborne particles. The pipe is capable of eliminating all the smoke and heat from the kitchen completely. How does that happen? The pipe sucks in all the fumes and releases them outside the house. They are suitable for commercial as well as residential purposes. They are a boon for commercials because of their capability of transporting large amounts of fumes, smoke and hot air at one go. Let’s have a sneak peek at the advantages and disadvantages of a duct kitchen chimney.

Ductless Kitchen Chimney: How does it work?

Unlike a duct kitchen chimney, this one does not have any pipes or ducts to channelize airborne particles outside the kitchen. On the contrary, ductless range hoods are equipped with a sizeable exhaust fan to eliminate all the smoke and adulterated air. The sole purpose of the appliance is to improve the quality of air.

The appliance is versatile and can be positioned anywhere in the kitchen. It requires no grilling on the wall for its installation. This also means the aesthetic appeal of the appliance is very pleasing to look at.

The working of a ductless chimney involves an exhaust fan. When the exhaust fan spins quickly to filter the air, it generates a lot of noise. The noise level would vary depending upon the model and power the appliance would require to suck the contaminated air. On the contrary, a duct chimney is silent in its operation. This is because the fans do not have to work on pushing the dirty air outside.

Most Indian kitchens are not very spacious. Hence, this factor can be a matter of concern. Kitchen chimneys do require a dedicated space of their own. Keeping this aspect in mind, a ductless chimney proves out to be more feasible. They require a bare minimum arrangement. In the case of duct range hoods, they need a massive setup. The appliance requires the ducts to be connected through the pipes for their functioning.

Cost is certainly a matter of concern while you consider purchasing any appliance. Price is the major distinguishing factor between a duct and a ductless kitchen chimney. The duct chimneys need a colossal and additional setup. This takes the establishment cost on the higher side. In the case of a ductless chimney, there is no requirement for any special establishment. Also, they are more affordable in comparison.

The difference between duct and ductless chimneys largely banks on the working of both the appliances. I have already run you through both.

The duct range hoods gather all the dirty air through its ducts and throw them put with the pipe. It is also capable of eliminating all the moisture and odour present in the kitchen after cooking. Not just that, it releases all the heat and brings down the kitchen temperature substantially. This entire mechanism will ensure your kitchen is dry, odour free and fresh.

However, the ductless range hoods can effectively filter out all the dirt particles from the air but are incapable of eliminating the moisture from the air. Not just that, the appliance is not competent enough to lower the temperature in the kitchen. So, on the grounds of the kitchen experience, the duct range hoods are more agreeable than the ductless ones.

Installation is the major disparity between a duct and a ductless chimney. The ductless ones do not require any major installation and can be positioned anywhere you like. You can also change the placement of it as and when needed. However, the duct chimneys do involve a legitimate procedure. It would be best to consider the chimney size, suction power, distance from the countertop, cut out from the external wall, and more. It requires professional and proper installation tools.

Yes, this is also an important aspect to consider. Indian cooking produces a lot of smoke, fumes, steam and more. The duct ranging hoods can efficiently prevent condensation buildup and evacuate all the steam. Sadly, the ductless model cannot do both. They can neither prevent the buildup of condensation nor can they remove the steam from your kitchen space.

If you need your appliance to be working uptight with full power, you certainly need to look into the maintenance aspect. The working of the duct ranging hoods promises an instant release of all particles. This makes the appliance easy to maintain. On the contrary, the ductless chimneys are equipped with filters for the refining process. These filters do require periodic replacement. The range hood also has power fans which you should clean efficiently.

Recommended Reading: What is an Auto Clean Chimney? Everything you need to know

Let’s take a quick glimpse of the difference between duct and ductless chimneys. One thing is for sure, post the comparison table, there will be no scope of confusion.

In a word, the duct range hoods are better performers. We won’t steal away the flexibility of establishment and cost convenience the ductless chimneys offer. However, speaking strictly based on efficiency and execution, ducted ranging hoods excel without a doubt.

Well, you know your requirements the best. So, the decision is completely yours. My role was only to point out the differences so you can make a wise choice.

Duct vs ductless kitchen chimney: Who wins the battle, according to you?

What is an Auto Clean Chimney? Everything you need to know