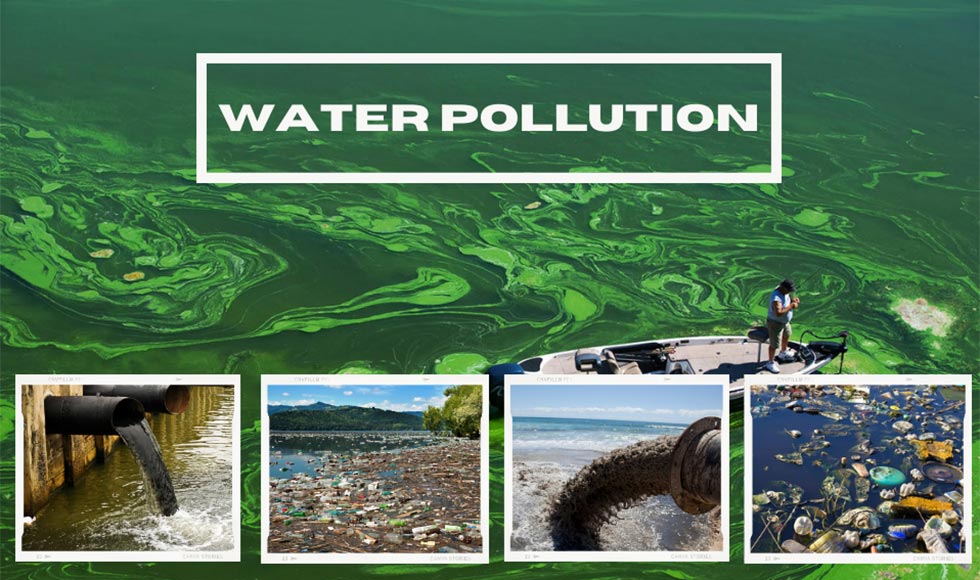 But what can be considered clean water? The World Health Organization considers clean water, as any water that is treated, and it’s free from chemicals, dirt, bacteria, rubbish and other contaminants that can cause ill health.

While there is a lot of water on the Earth, very little of it can actually be used by humans. 97% of the water on the Earth is salt water in oceans lakes or rivers, and this can’t be used as clean drinking water. Another 2% is locked up in ice at the North and South Poles, this leaves just 1% of the water that is fresh and usable to be shared by all the living things in the entire world. With so little fresh water available, we must take care of what we have. So, it doesn’t become polluted.

What Is Water Pollution?

Any undesirable change in physical, chemical or biological characteristics of the water that makes it unfit for its intended use, is known as water pollution.

The presence of chemicals, microorganisms, waste or sewage which make water unfit for its desired use is also known as water pollution as per UNESCO.

Presently, pollution of water resources is a significant problem, as it kills aquatic microorganisms, plants and animals by destroying the entire aquatic ecosystems.

Industries use water as a solvent for washing. Industrial wastewater contains a variety of chemicals, depending on the type of Industry. These chemicals may be inorganic or organic substances.

Industries discharge wastewater directly into water bodies such as lakes, rivers and seas. Most of these chemicals, present in industrial wastes, are toxic and kill aquatic organisms. These chemicals react with oxygen, are present in the water, and reduce the oxygen level of the water. It affects the life of aquatic organisms severely and causes immense damage to the ecosystem.

Industries also cause thermal pollution by discharging hot water into water bodies such as lakes, rivers and even into the sea. It increases the temperature of the water and adversely affects the stability of the ecosystem.

Fertilizers and pesticides applied in the agricultural land, are not entirely used up by crops. Excess amounts of these chemicals percolate into the soil and pollute the groundwater.

They may also be washed out from the agricultural land during monsoons and reach large water bodies such as lakes, rivers and the sea. When this water is consumed, pesticides enter into the bodies of aquatic organisms and even terrestrial animals.

These pollutants pass through the food chain and accumulate in the tissue of the animals. For example, a considerable amount of DDT is found in cows, buffalo and even in human milk and the meat of several animals.

Fertilizers that enter and pollute the aquatic ecosystem promote the growth of diatoms, algae and other plants in lakes and rivers. Extensive uncontrolled growth of these diatoms, algae and other plants in water is called eutrophication. In this event, the uncontrolled growth of plants blocks the flow of water and reduces the oxygen of the water. Therefore, other organisms living in the water do not get sufficient oxygen and ultimately die. Their dead bodies sink to the bottom, decompose and pollute the entire water body. It also increases the turbidity of water and reduces the amount of sunlight entering the water.

Sometimes organisms present in the aquatic ecosystem, decompose these pollutants and make the water smelly. Organic compounds in biological pollutants promote the growth of bacteria and other microorganisms in the water. A large number of these organisms reduces the availability of oxygen in the water.

Moreover, parasites that are present in the animals and their excreta also enter into the water, which causes the spreading of parasite diseases to other animals and humans.

Now let’s see the pollution of seawater by oil. Vast quantities of crude oil are transported in oil tankers by sea routes throughout the world. Any damage to these ships results in a leakage of oil into the sea.

Oil, being lighter than water spreads as a fine layer over the top of seawater. It is called the oil spill, which may be several kilometres wide.

Oil spill does not allow oxygen to penetrate the water and causes the death of many marine organisms. When the spill reaches the shore, it also destroys the shore ecosystem.

It is tough to remove the oil spill from the sea. Recently, using genetic engineering methods, scientists have developed bacteria, which can degrade the oil. Scientists are testing the efficiency of removing the oil spills of these bacteria.

Now let’s see water pollution due to the unhygienic habits of the human community.

Washing of domestic animals and throwing household waste in the rivers or lakes also pollute the water bodies and contaminates them with parasites and other unwanted organisms.

In towns and cities, the sewage water is released into rivers, which contaminates the water with inorganic, organic and biological pollutants and makes it unfit.

What Is Waterborne Disease?

While diarrhoea and vomiting are the most commonly reported symptoms of waterborne disease, other symptoms can include problems related to skin, ear, respiratory system, eyes etc.

let’s discuss these diseases one by one.

Amoebiasis is the most common waterborne disease. It’s caused by entamoeba histolytica. Usually, it is transmitted from hand to mouth. When hands get contaminated with this organism, and we eat food without washing our hands properly, the cysts of amoeba get into our body through the GI tract.

E. coli infection is also a common waterborne disease. Water contaminated with the E. coli bacteria is the source of infection to a human being.

Mostly, diarrhoea is a common symptom. But it can cause death in immunodeficient, very young and elderly persons due to dehydration, which develops very rapidly in E. coli infection.

Typhoid fever is a widespread disease caused by contaminated water. Water contaminated with the faeces of an infected person is the source of infection.

The disease is characterized by sustained fever up to 40 degrees Celsius, profuse sweating, diarrhoea are common symptoms, which may progress to delirium and spleen, liver enlargement.it can last up to four weeks and can cause the death of the infected individual.

Hepatitis E virus causes the disease, and the infection is transmitted through drinking water and causes symptoms like fatigue, fever, abdominal pain, nausea, diarrhoea, weight loss, itching, jaundice and depression in many individuals.

The only method to reduce water pollution is to treat and clean this sewage water and effluents from industries, before releasing them into water bodies.

Firstly, municipal wastewater needs to be filtered to remove particulate material and stored in shallow tanks where bacterial degradation of organic compounds takes place. Secondly, this water needs to be treated with chlorine gas to kill the bacterium. Thirdly, Nitrates and phosphates need to be removed by chemical treatments, and finally, this treated water can be released into rivers.

Industries should also follow a similar procedure. They should neutralize effluent water and remove chemical pollutants before releasing it into the water bodies such as lakes, rivers and sea.

These processes are costly, time-consuming and non-productive. Hence they are not adopted. Instead, untreated effluents are released directly into water bodies.

Today, water is polluted by harmful chemicals, bacteria and viruses. A good water purifier saves us from water pollution. Now, you can get safe, purified drinking water at your home by installing a best water purifier.

Stainless Steel vs ABS Plastic RO Water Purifier Tanks – Which One Is Better For You?

What is Alkaline Water And What Are Its Benefits?

How to check TDS of water

What is a TDS Controller in a Water purifier?

A Brief Overview of Groundwater Pollution in India