If you’re a designer or an artist, then you might want to use touch screen laptops. After all, they can offer you a great amount of precision and control while also increasing the quality of your productions. So, we’ve made this article to help you figure out if touch screen laptops are a good choice for you. We’ll also compare them with the regular ones if you’re just a regular user just looking to experiment with such a laptop. 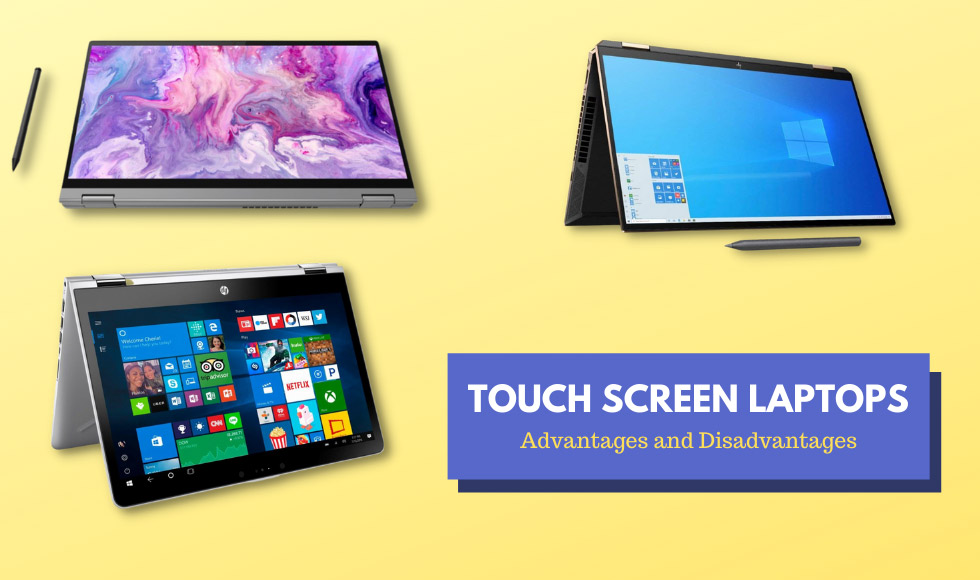 Before we get to the advantages and disadvantages of such kind of laptops, let’s discuss how their touch mechanism works. There are two types of touch screen displays. The first type is the Resistive Touch Display, while the other one is Capacitive Touch Display.

Both of these types work differently and have some limitations as well.

Resistive Touch works through the help of two layers; the Resistive Layer and the Conductive Layer. The two layers are stacked on top of each other. Electricity courses through both of them when the laptop is turned on. This sort of Touch screen primary works through a focus point.

To clarify, you touch the Resistive layer when you touch the screen. Once you put enough pressure into it, it’ll sink in enough to touch the Conductive layer underneath. This causes the electricity at that particular point to intensify. Afterwards, the laptop’s Touch screen Software takes note of the input and takes consequent actions based on how the gesture is inputted.

There are some noticeable downsides to such a type of display, though. For a start, the use of two layers makes the display thicker. More importantly, this sort of Touch screen display doesn’t support Multi-Touch. That’s because it’s designed to work based on a single point of contact. You can’t even perform basic Multi-Touch gestures on it, like Zooming in or Zooming out.

Capacitive Touch doesn’t have such limitations, and it works far better. This sort of display doesn’t use stacked layers like its Resistive variant, so it isn’t as thick. It works through the change in electric intensity rather than pressure difference. An equal amount of electricity runs through the layer when it isn’t being touched. On touch, the display detects the change of electricity at the point of touch caused by the static electricity within the human body. Afterwards, the laptop’s Touch screen Software analyses the touch and performs the right action.

Because of this mechanism, Capacitive Touch is far more responsive and is better at registering touch than Resistive Touch.

As these displays don’t rely on a single point of pressure and rather just different electrical inputs at certain places, they can support more than one finger. Not only can you Zoom in and Zoom out easily, but you can also input with as many as ten fingers at once.

Touch screens are extremely handy, but they have very specific uses. They’re one of the features you can skip to save money. So, which one is better for you? a touch screen laptop or a non-touchscreen one?

The biggest advantages that non-touchscreen laptops have over their counterparts are the significantly reduced price, increased battery savings and better resistance to marks. If you’re an average user, you might want to buy a non-touchscreen laptop for the first reason alone. Here’s a comparison table for the other differences.

1. Are there any other alternatives to Touch screen laptops?

Yes, there are. You can try some other options if you’re a designer or artist that needs to use touch-input in combination with Windows. There are devices called graphics tablets. They come in two types; one type is where the device has Windows installed directly on it and works as a Windows tablet. These devices are expensive but powerful.

The other type of graphic tablets works as extensions of a separate computer. They don’t have screens like their counterparts do. Instead, they have black pads where you can draw with a stylus- the tablet software will analyse your gestures and create them on the main computer screen.

2. How much does the price increase with a Touch screen?

Most touch screen laptops cost more than Rs 10000 than their counterparts that come without Touch screens because of the premium display. There’s a significant amount of long term investment as well. You’ll have to put in a lot more money for the laptop’s maintenance, especially if something happens to the display.

3. Which brands are good with Touch screen laptops?

Most of the regular high-quality laptop brands produce good Touch screen laptops, like HP and Samsung.

4. What’s a good price for a Touch screen laptop?

Generally, you’d want to go as high as possible since Touch screen laptops don’t have a lot of power on the lower-end. However, we suggest starting from laptops under Rs.50000 and going upwards.

5. Can I clean a touch screen display with anything?

Yes, you can, but it’s not recommended as these displays are more sensitive and can lose effectiveness if you clean them with the wrong material. Make sure you use a soft cloth to clean it every time.

6. Can I find touch screen laptops with lower resolution displays?

7. Can I run any OS with touch screen laptops?

Not really; most Operating Systems don’t have proper support for such input yet. Even Windows 7 struggles to work smoothly with this sort of input. The only viable OS is Windows 10. However, it’s only effective for touch screen in Tablet mode. While Navigation becomes much easier, you lose the advantage of using multiple floating windows at once- the system will force apps to become fullscreen.

Touch screen laptops are great in their own right and a huge boon to any creative laptop user. There are some shortcomings, but many of them can be fixed through software updates as the technology and Windows evolve further.