When you’re looking for something to keep you cool during summer, it’s normally a good idea to go for Split or Window ACs. They can offer a higher area coverage and more powerful cooling. However, it might be a better option to get a Portable AC in some cases. What is a Portable AC, you ask? I’ll be answering that question in this post and telling you details about all its advantages and drawbacks. Let’s get started.

What Is A Portable AC 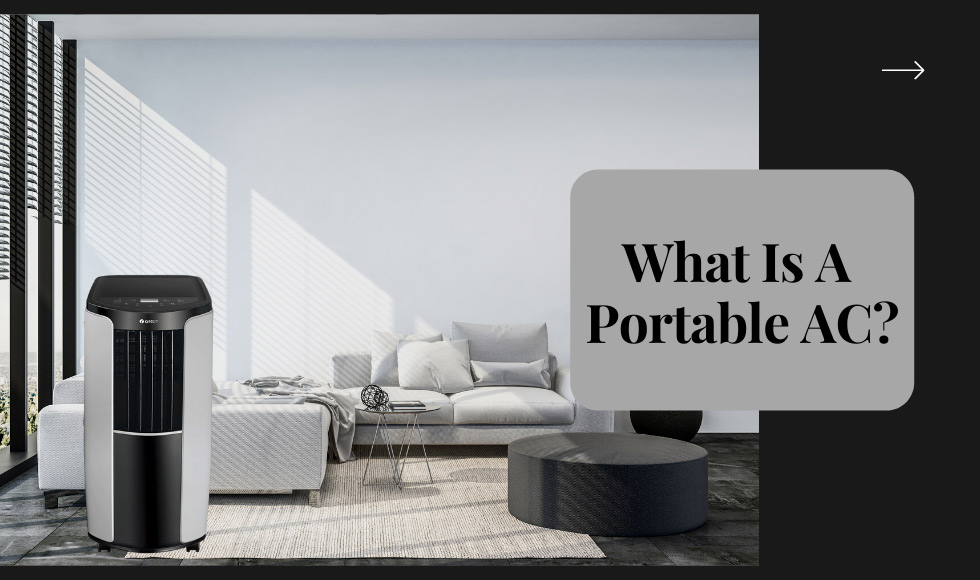 The extra portability offered by Portable ACs is primarily what sets them apart from their bigger counterparts. In terms of cooling mechanism, the process is similar to Standard ACs, except that everything is fit into one appliance. Like every other AC, these devices use an evaporator coil, refrigerant gas, condenser coils, a fan and a compressor to cool down the air. The unit’s fan first sucks in hot air inside the room; then it passes through the evaporator coil, where the refrigerant gas removes the heat from the air and cools it. Finally, the cooled air is released back into the room by the fan.

Recommended Reading: What is Inverter AC

The Indian market primarily consists of one type of Portable ACs; Single-Hose ones. However, Dual-Hose Portable ACs are also starting to make their way into it.

Portable ACs with a single hose use it to both suck in air from outside and push out the warm air. Consequently, these units are less effective as they have to fight against the pressure difference.

On the other hand, Dual-Hose Portable ACs have two hoses; one hose brings in air from outside while the other expels the warm air. They work more efficiently because of that. Good Dual-Hose ACs are a little harder to find, but they’re worth the effort. You can still do well with Single-Hose ones; just make sure that the place is properly insulated and the doors are closed to get the best performance.

Recommended Reading: Split AC vs Window AC – Which one should you buy?

What Are The Benefits And Drawbacks Of Portable ACs Over Regular ACs?

Aside from the difference in efficiency, both the pros and cons are the same in the two types of Portable ACs.

Overall, Portable ACs are good. They’re no replacements for Standard ACs, but they can still serve you really well.

Unlike standard ACs, Portable ACs should be chosen according to their BTU numbers, not tonnage capacity. BTU stands for British Thermal Units, and it indicates how much heat the AC can remove in an hour.

Here’s a rough guideline to help you pick the right BTU number for your specific room size.

Can Portable ACs work without windows?

Portable ACs come with an exhaust hose, which is meant to help them vent. While normally people tend to put the exhaust hose through windows, you can also put it through a wall, roof or door.

Are there any Portable ACs that don't need venting?

Yes. Some Portable ACs can cool the room down simply by getting rid of moisture. Rather than using a vent to do that, they use a water bucket which collects the excess moisture and needs to be drained out manually.

Do I need to fill a Portable AC with water to make it work?

No, you don’t need to do that.

Do Portable ACs with an interior bucket cause issues when they're not drained?

Yes, if the water is not drained out regularly, it can build up and cause the Portable AC to overflow. It’s important to make sure that you drain it out every day. Plus, if you let the water stay in for too long, mould can also grow on the interior surface.

Yes, you can install Smart AC controllers to Portable ACs that use an IR Remote.

Will I face any problems if I leave my Portable AC turned on while I'm not around?

Sort of. Most Portable ACs can automatically drain the excess water they store, so there’s no real issue. However, leaving one on will still cause you a lot of extra power consumption. It’s better to install a Smart Controller and set up a schedule or use a Geolocation Feature.

Is it possible to make Portable ACs less noisy?

You can reduce the noise slightly by placing the AC on a rug.

What is a Portable AC? I hope this post was able to answer that question for you. Portable ACs can be a great addition to your home; the right one can keep you perfectly chill and comfortable during even unusually hot days. Just make sure to do your research before making any purchase. Thanks for reading!

Reciprocating vs Rotary Compressor in AC: Know the Difference

Types of Air Conditioner Filters and How They Work